Jerry Has No Taste: The Neurologist Has Her Say

Personally, the neurologist won me over. I made it from the waiting room to an exam room, where I continued waiting. I began glancing at my watch, a bit irritated, though not surprised that the exam room was another waiting room. Then, she opened the door a bit and apologized. “I’m sorry you’re having to wait,” she said. “Another patient took longer than I thought. But don’t worry. I’ll answer all your questions.” No doctor had ever said that to me before.

Plus, I had this nagging feeling that she looked familiar. I soon realized that we had met on two different occasions, both at the homes of mutual friends. The second time was at a neighbors’ Fourth of July party. She and her lesbian partner wore red, white, and blue costumes that were a big hit. After we recalled our meetings, she even remembered that I had written Grady Baby, a book about Atlanta’s Grady Memorial Hospital.

She led me through a routine neuro exam, including walking down the hall to observe my gait. Apparently, I walk just fine, and everything else about me passed the test. She repeated what the others had said: I don’t know what caused it, can’t fix it, don’t know if you’ll get it back. And: “I’m sorry this happened to you. It sucks.” She added that her father had lost his taste and smell, and they returned after a year or so—which gave me a bit of hope. Finally, she asked, “What am I forgetting?” I couldn’t think of anything, so we got to what to do next. She said there was a tiny chance I had a tumor in my brain, a meningioma, and I could have a brain MRI done to rule that out.

A meningioma is a tumor that arises from the meninges — the membranes that surround your brain and spinal cord. Most meningiomas are noncancerous (benign), though, rarely, a meningioma may be cancerous (malignant). Some meningiomas are classified as atypical, meaning they’re neither benign nor malignant, but rather something in between.

Meningiomas occur most commonly in older women. But a meningioma can occur in males and at any age, including childhood.

If the person who wrote the Wikipedia entry on meningiomas is correct, 8% of them occur in the “olfactory groove” and affect smell and taste.

Once chance in a hundred I would have this, she said. Those are mighty good odds. However, I had beaten those odds before—and not in a good way. Ten years ago I noticed a hard bump in the middle of my bottom lip. It resembled a small wart and was more annoying than painful. For a while, I treated it like a fever blister: get rid of it and assume that’s that. I would snip it off with fingernail clippers. (When I told my dad about that, he said, “That was dumb, you know.” Of course, he was right, but stupidity often doesn’t get in my way.) But it kept coming back. Finally, I had a biopsy done by a doctor who, because I had none of the risk factors for skin cancer (smoking, dipping snuff, working outdoors), said he was confident he would call me in a few days and tell me it was negative. “Nine out of ten times it’s benign,” he said.

A few days later, one of his medical residents called me and said, “The doctor would like to talk to you about your biopsy.”

“He will tell you in his office.”

“It is something about the way the cells are dividing.”

OK, he’s not going to tell me, not going to disobey his boss. And maybe I quit pushing him because I didn’t really want to hear right then, over the phone, what was obviously going to be said. I wanted to hear it in person–from a real doctor looking me in the eye.

The good news was that it was—if you have cancer—the kind you want to have: squamous cell carcinoma and “well defined,” which meant it was limited to that small spot on my lip and, once removed, very unlikely to return. After a morning of outpatient surgery, the cancer was gone. Thanks to the numb spot left behind, however, I can’t whistle very well anymore. After five years, there was still no sign of cancer, so I was eligible for life insurance. If I die, my wife can pay off the house and car and take a nice vacation. (She has always wanted to visit Japan.)

The one-out-of-a-hundred, therefore, wasn’t as assuring as it might be otherwise. Still, I wavered having a brain scan, mainly because it would cost $900. Jerry the Cheapskate thought, “Do I want to spend $900 to find out I DON’T have something?” I called a trusted friend who said, “Jerry, you need to find out.”

When I arrived for the MRI, they asked me if I was claustrophobic.  For the life of me, I don’t know why I said “No.” Vanity, I guess, thinking someone my age should have gotten over that long ago. When I was a child, my friends would crawl through the pipe under the road, but I would poke my head in there an inch and freeze, frightened that I would somehow get stuck in the middle. I always backed away.

A few years ago, my family visited Ruby Falls, in Chattanooga, Tennessee, an underground waterfall at the end of a long cave. To get there, you descend 1,120 feet in an elevator to the cave, then walk to the falls. I felt nervous waiting on the elevator to take us down; a man behind us backed out before even getting on it. As the elevator slowly descended, I became more anxious, irrationally fretting that the cave was going to collapse. When we entered the cave, I nervously said I didn’t know if I could go on. The attendant said, “I can send you back up. We do it all the time.” My daughter took my hand and gently said, “You’re going to be OK, Dad.” With that assurance, I proceeded, all the while saying to myself over and over, “This cave has been here millions of years. It is not going to collapse today, just because I’m here.”

In the MRI clinic, I remembered that incident and confidently thought my claustrophobia was in my past. Just before I lay down, I thought about glancing inside the MRI machine to confirm there was an exit on the other side, but didn’t—again, false confidence—and I felt OK until he strapped my head down. Then I panicked. The technician had almost left the room when I said, “Get me out of here!” He backed me out of the machine and unstrapped my head, and I sat up. I told him that I needed to look inside the tunnel and see an opening on the other side. That shouldn’t have mattered because I was not going to exit that way, but it felt reassuring to know I wasn’t going to be trapped in a dead-end cave. However, there was still that strapping down of my head. That was scary. Once I was again strapped in and inside the tunnel, I calmed myself by looking down toward my feet so I could see, through the glass, the technician moving around inside his booth. Seeing a human being in a lab coat operating the machine in a booth (who wasn’t a mad scientist) moving freely somehow reassured me I would be OK.

A few days later, the neurologist called and said everything looked normal. (I do have a “partially empty sella,” but that is, apparently, no big deal.) I was relieved but a part of me wanted my $900 back.

A few weeks later, I was driving along in my car and remembered that I had been snow skiing near Rochester, New York, just before the time I stopped tasting food, and I had fallen and hit my head. It was a strange fall because I was not on a steep slope. In fact, I was on a gentle run on the last leg before I reached the lift at the bottom of the mountain. But I remembered that my skis bumped together and I hit my head pretty hard. I had been surprised that I hit it as hard as I did, considering how slowly I was moving. The docs had told me a head injury could possibly cause this malady, so I called the neurologist’s office and left a message about this incident with her assistant. The doc called me the next day and said, going by my description, that fall was not severe enough to be the cause.

For our Holiday party, two days before Christmas, I baked oatmeal raisin cookies that everyone said were delicious. We hired a neighbor to make barbecue pork sandwiches, chicken salad, and collard greens. Everyone said everything was terrific. My pastor said it was the best chicken salad he had ever tasted. 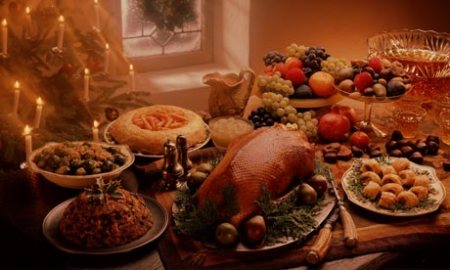